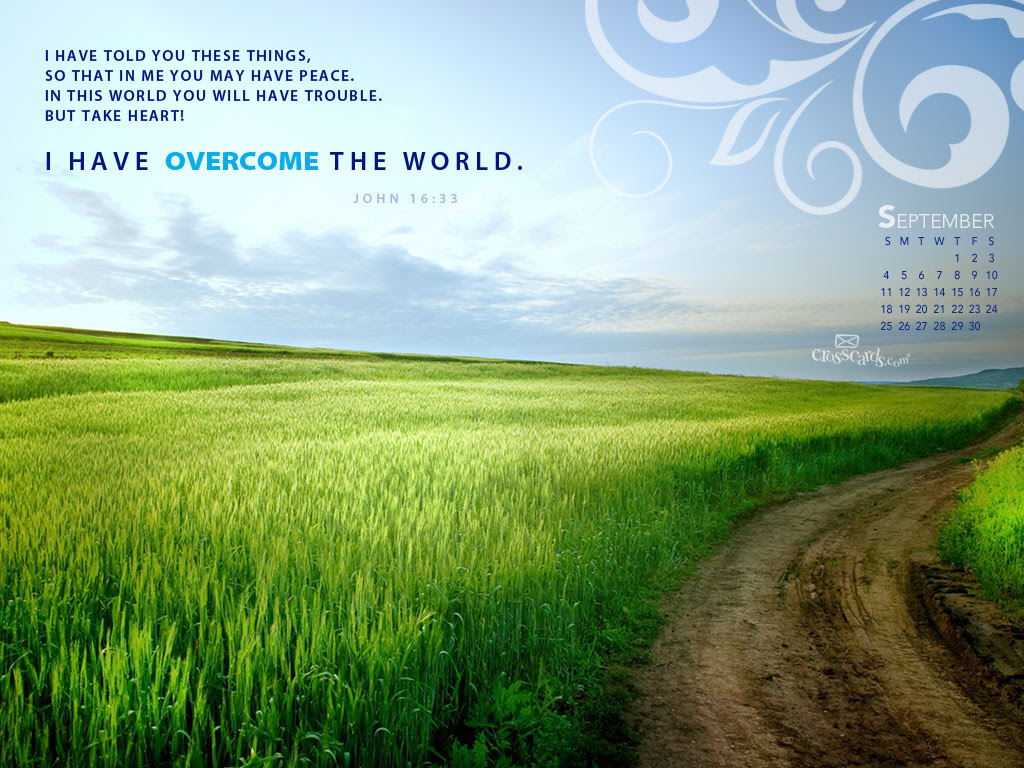 Earlier this evening a dear friend prayed for me and I knelt beneath the comfort and assurance of our place before the throne.  I love being there; what an honor it is to lift one another up to the Lord with our thanks-giving and requests.  Within her words of grace, I was made mindful of the fact as she so sweetly put it, "We do not reap in the season we sow."   I am in a challenging season of field work at present, and it is taking all my energies of time and resources to press devotedly into the task before me.

The photo for this post is taken from the wallpaper currently on my computer.  The scripture is John 16:33.

I have told you these things,
So that in Me you may have peace.
In this world you will have trouble
But take heart!
I HAVE OVERCOME THE WORLD.
He tells me....

I looked intently at the field in this picture tonight.  Light and shadows played against one another, the blades of grain separated into individual stalks with pale golden heads and green blades bent delicately, dark ruts and grey pebbles in the nearby road sharpened into focus.  I am here; I am sowing and sweating, and in due time and season the harvest will be reaped.

I have put off setting aside my blog.  It has been such a personal joy, and sometimes its just plain hard to let go of something we love and find fulfilling.  But the field in which I am currently called to work requires my full attention and holds a higher place of priority and so I have peace.  Not just any peace, but His peace.

Thank you for reading.  This has truly blessed me.

Pardon me my sentimental beginning and brevity.
Twenty-seven years ago, I married my best friend.  Less than a year later we welcomed our first child.  Last month we saw him wed to one who I am honored to now call daughter.  I am richly blessed. 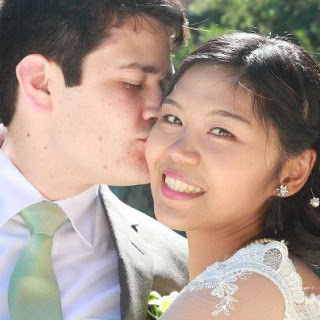 “He is the half part of a blessed man,
Left to be finished by such as she;
And she a fair divided excellence,
Whose fullness of perfection lies in him. ”

― William Shakespeare *
*Taken from the card that my sister Lana gave to me on my wedding day.
God bless you, Quentin and Meow.
Posted by Shyla at 11:25 AM 2 comments:

It was our first Christmas in our new home.  The boys were old enough to handle the responsibility.  If we waited too long, they might grow past the time when they could still be selfless enough to appreciate the gift.  We finally owned our own home again.  M and I negotiated and compromised, it could stay inside but would remain in the kitchen. This was the year, I told my husband.  We had to get a dog - now.

With his approval, I began stealth operations of scouring the classifieds and making secretive phone calls out of earshot of our children.  I fit visits to numerous pounds and even a few private homes among my grocery shopping outings to check out prospective pups.  I even put money down on a sweet little beagle (M's choice of breed, I wanted a Lab) out in Union County.  But on the way home, I happened to stop by their animal shelter.  A shy, blond beagle mix caught my attention and I just couldn't shake her sweet face from my memory that night;  the thought that she might meet an untimely end was too much.  So, I pleaded with M that I might apologetically cancel the check on the beagle and return for the mutt.  He relented and the next day I did so in that order, only to find that the little heart-breaker had found a home already.  I rejoiced for her, but now I had only a week to find our puppy.  A few days later, I told my husband, "I'm going back to that pound and either I'll find our dog or there won't be one under the tree this year."

Returning to the shelter, I actually walked by her several times without too much notice.  All the other dogs were desperately clamoring for attention, jumping and barking and whimpering and crying.  I dutifully did my best to try to give them comfort and love before apologetically extricating myself from their paws and pleading.  This one, though, she was different.  She didn't bark.  She didn't jump up and beg.  She watched me quietly with her steady brown gaze, her face divided right down the middle as by an invisible line, black on one side and a splotchy grey on the other.  (Later I learned this is called blue merle.) I read the label outside her cage: Border Collie/Australian Shepherd Mix.  She was a round ball of fluff, standing inside her small space on four stout little legs, sizing me up as I looked her over.  I entered her kennel and she readily allowed me to pet and stroke her soft downy coat, eventually lying down half-way - enough for me to rub her tummy, but not fully on her back.  She wasn't afraid, it was more of an awareness that we really didn't know each other yet, not really.  I was struck by her independent spirit.  "Yes," I said, "you'll do.  You're kind of funny looking in a cute way, but I think you'll fit in just fine."  And she did.  And that's how Misha came to be a part of our family. Like my daughter recently said, "she wasn't just a dog, that doesn't describe her.  She's Misha."

For the past fourteen years we all grew deeply in love with her and she with us. She had her weaknesses, but ones we could live with.  She was so smart, even when she pretended not to be. She was a big believer in the sanctity of personal space balanced by affectionate connection and contact.  She really was one of us, unique and different and loyal and secure in our love.

Shortly before our oldest two graduated from college, we discovered a lump in the front of her neck.  It turned out to be thyroid cancer and we were told she had six to nine months more or so.  Actually, we were blessed with over three more years, and she never was the wiser as far as we could tell.  She remained sharp and bright, sweet and faithfully dear.  Her hearing started to fade of late, but once you made eye contact you were on a level of full understanding.  Unfortunately, her weight just began dropping in the past year and continued to do so, of course.  My husband and I waited until our son D returned from a trip out of town.  We all recognized where this was heading for her and agreed it was time.  The three of us took her in to the vet's office.  They allowed us plenty of time and privacy to love, love, love on her, sharing funny stories and tears.  At the last, we sat in a circle around her and stroked her gently; she had the comfort and assurance of our devotion and tenderness and I know she felt that.

Whenever my kids would ask me if our pets go to heaven, I always hesitated.  I never wanted to answer simply out of sentimentality, it just wouldn't be honest.  But as time passed I considered this more carefully in light of the Lord.  He will make all things new when He returns, restoring and reconciling all things to Himself.  I never doubted that sparkling rivers and glistening streams would be a part of this re-established earth, or beautiful mountains and shady valleys. And they would be teaming with flickering fish and frolicking animals as well.  So I've come to believe something, not because it brings me comfort, though it does; but I believe it because of my God who is the great Redeemer.

On August 12th, we sent our good ol' girl on ahead of us.  For now we miss you so much Mish, but heaven is all the sweeter because you will be there to welcome us in joy - hale, healthy, and happier than we can possibly imagine. 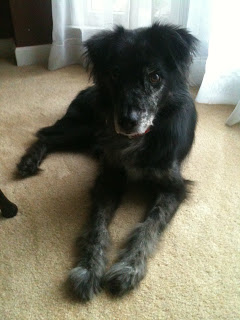 Shyla
North Carolina, United States
Somebody once called me a Militant-FlowerChild, and I thought, "he gets me". A Navy Kid, oldest of six siblings, a stay-at-home Mom of five blessings, married to the love of my life, and sold out to the Lord, Jesus Christ. Been homeschooling for 17 years now. I'm an avid reader and researcher, and an adoption advocate.